The NCGOP Legal Team has been hard at work to defend election integrity and hold public officials' feet to the fire when it comes to the Rule of Law. Last week saw a victory on that front: NCGOP legal actions earned a favorable ruling from the N.C. Rules Review Commission after challenging the N.C. State Board of Elections to change rules concerning poll observers at the last minute.

On August 25, the N.C. Rules Review Commission voted against temporary rules hastily adopted by the N.C. State Board of Elections that would have made disruptive changes to citizen participation in elections.

The commission ruling is a win for the Rule of Law. The State Board attempted to skirt rulemaking protocol to force the changes, making the dubious claim there was insufficient time remaining before the general election to follow the "lengthier" permanent rulemaking procedures.

Fortunately, the State Board was still, however, obligated to allow for public comment.

Alas, the State Board persisted in adopting the temporary rules, and so: 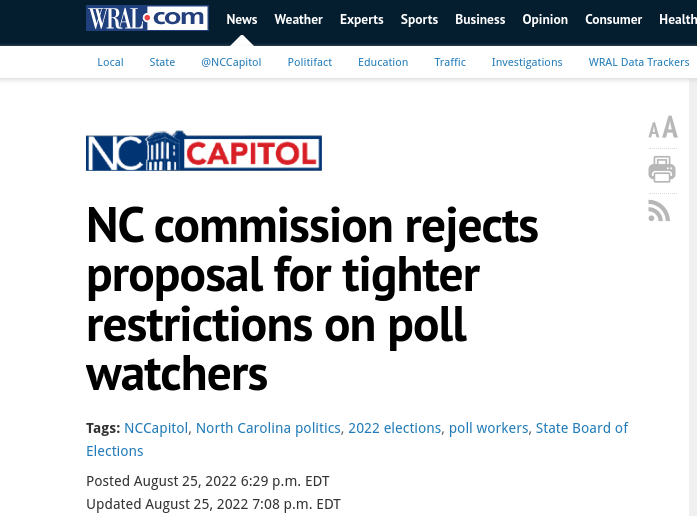 In a win for the Rule of Law and the People of North Carolina, the commissioners concurred that the State Board had broken with rulemaking procedures to ram through these rules without sufficient legal cause.

"Plain and simple: the Democrat-controlled State Board attempted to subvert the administrative rulemaking process," said Chief Counsel of the N.C. Republican Party Philip Thomas. "The voters of this State owe thanks to the commissioners who stood up for the Rule of Law."

The State Board has continuously claimed to defend the validity and integrity of elections in North Carolina. Such integrity can only occur when the rules are followed as written, not by partisan Board members claiming ambiguous temporary rules must be immediately enacted. The proposed rules did not ensure the integrity of the election process. Rather, the Board's hasty rules would have restricted the ability of North Carolina voters to observe and report election fraud and irregularities.

The Rules Review Commission decision is an encouraging win for accountability and the Rule of Law. Even so, it is but one of many areas in which Democrats seek to weaken election integrity and abuse their powers to advantage their partisan agenda. The North Carolina Republican Party, the NCGOP Legal Team, and the RNC will continue standing firm to guard against such corrupt actions.

The NCGOP continues to work to restore voter confidence in the election process, will always advocate for the adherence to the letter of the law, as set forth by our Legislature, and ensure our elections are handled with the utmost integrity.